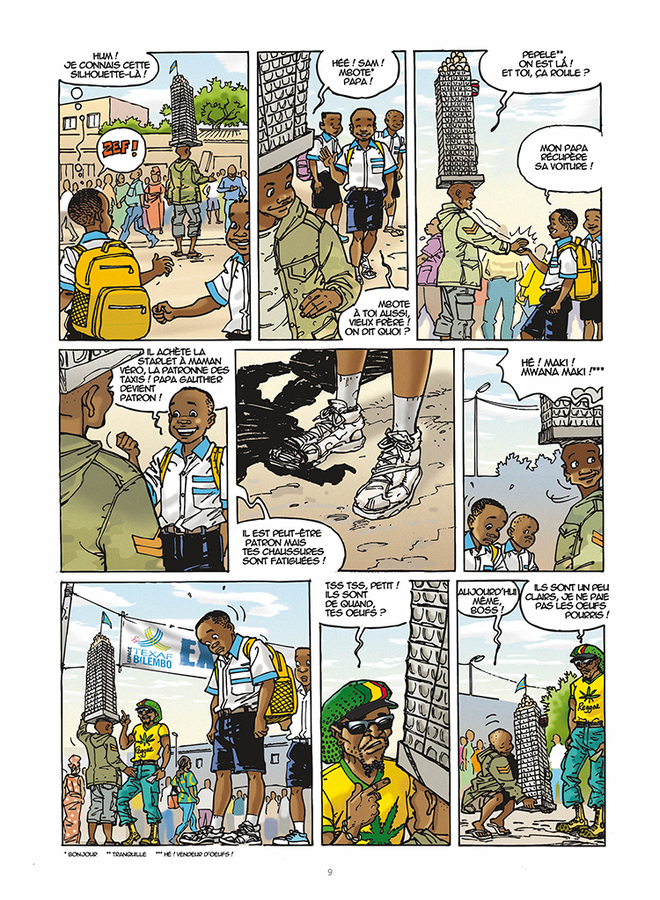 "No polished shoes, no school.
In Kin the beautiful, Samuel 10 years will discover the realm of the resourceful.
Article 15 Dad! "

"Debout Kinshasa" is a multimedia entertainment package designed as a teaching tool, designed by the director Sebastien Maitre, spreading the adventures kinois Samuel, who can not go to school because of a lack of shoes, deploys a treasure of ingenuity to find a way to pass the school portal. By dint of optimism and ingenuity and helped by his family and friends he will overcome all difficulties.

This multimedia set consists of a short film "Debout Kinshasa! ", a documentary series entitled" The Little Professions of Kinshasa ", consisting of 9 vignettes illustrating the small trades that make the vitality and richness of the streets of this city, and a cartoon" Mbote Kinshasa ". Wishing that one of the DRC's most popular artists could deliver his vision of his city and country, Sébastien Maître entrusted his story to Kashoun Thembo, said Kash, a great Congolese cartoonist.

After the success recorded by the first edition of this comic book for children, a second edition translated into Swahili and Lingala was produced and distributed in the DRC to children attending the broadcast of the short film as part of the national tour, initiated by the French Institute, as well as vulnerable children.

As part of its mission to support change through advocacy, AMADE wished to join this initiative by supporting the translation and free distribution of 10,000 copies of the "Mbote Kinshasa" comic strip.

This project is supported by the Department of Cooperation and Cultural Action of the French Embassy in Kinshasa and the Institutes and Alliances Français of the cities of Kinshasa, Kinsangani, Lubumbashi, Goma, Bukavu and Matadi.

Translation into Lingala and Swahili;
Print of the comic in 10,000 copies in black and white;
Free distribution.

The comic strip "Mbote Kinshasa" is available in Lingala and Swahili.

Provision of its digital version.