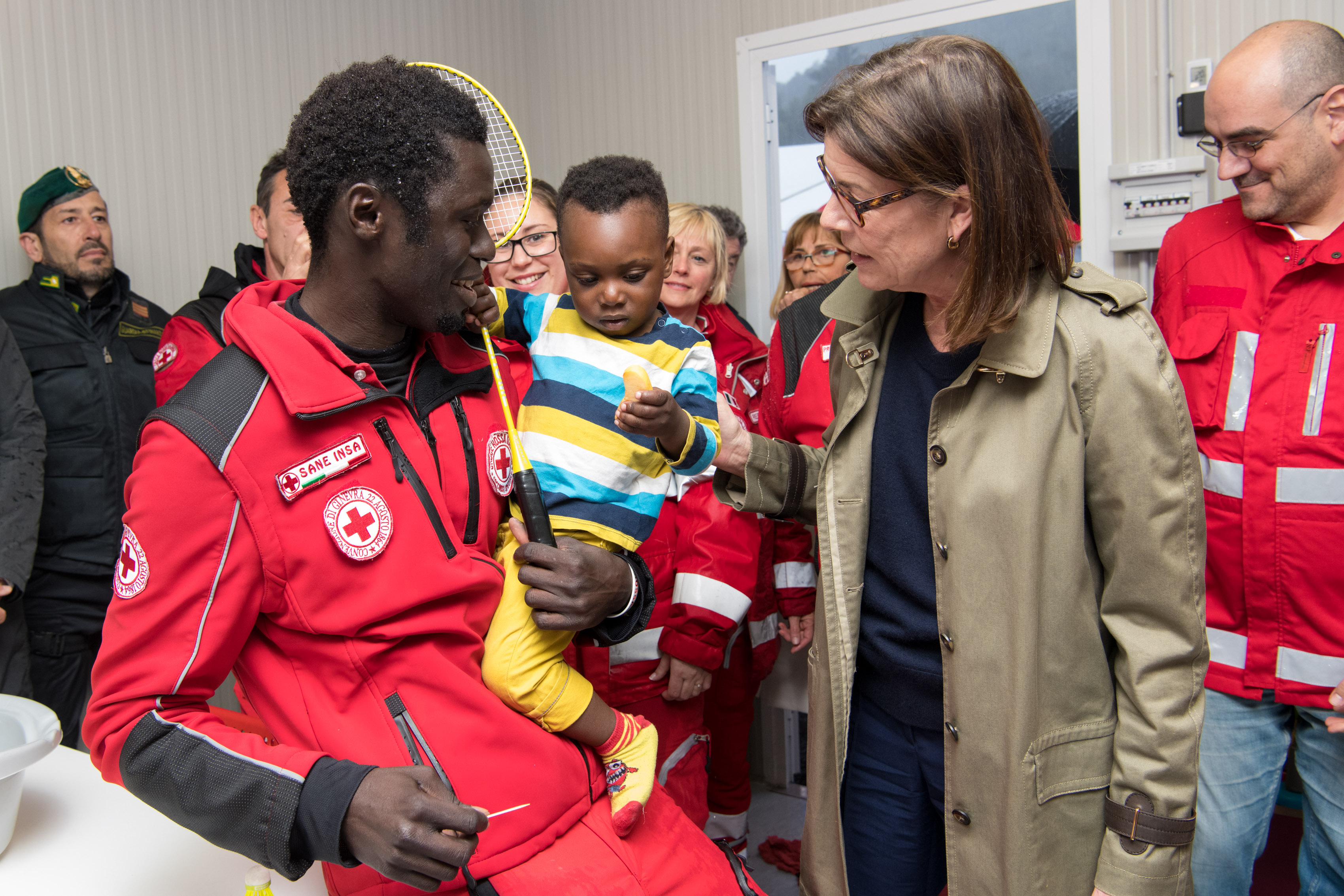 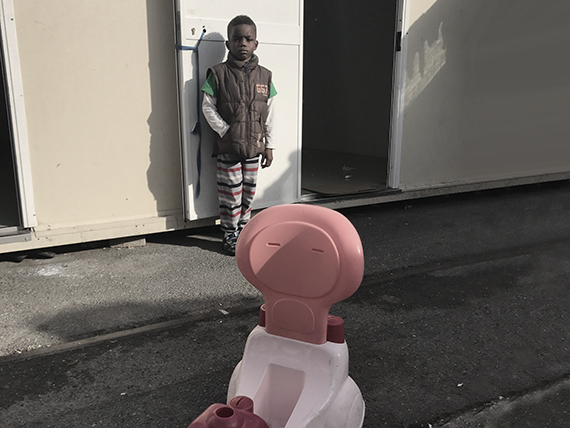 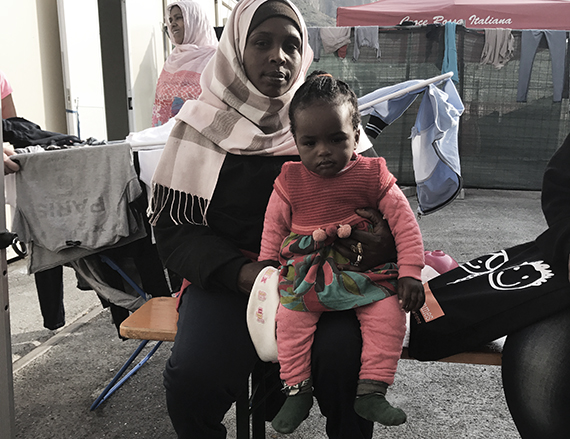 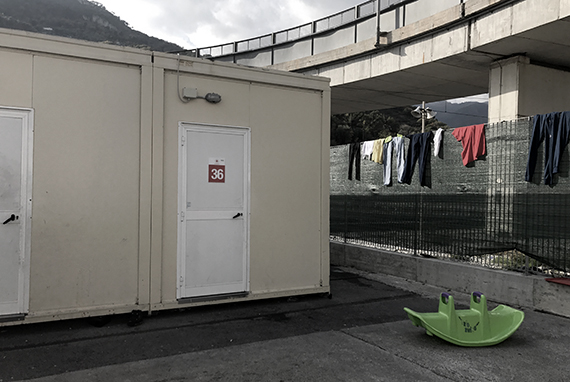 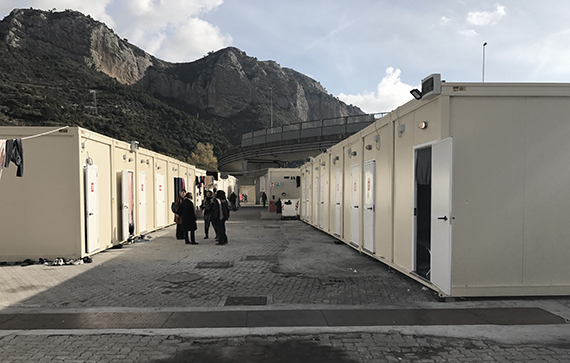 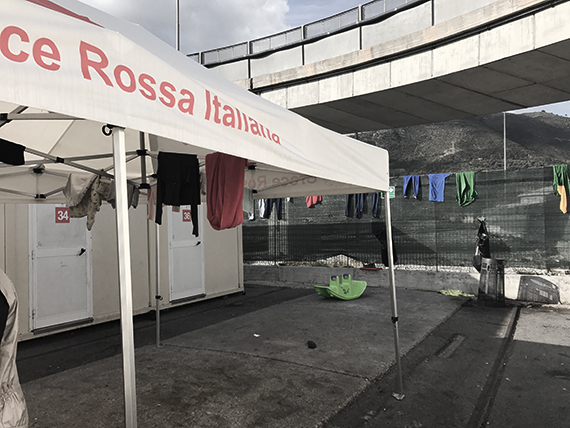 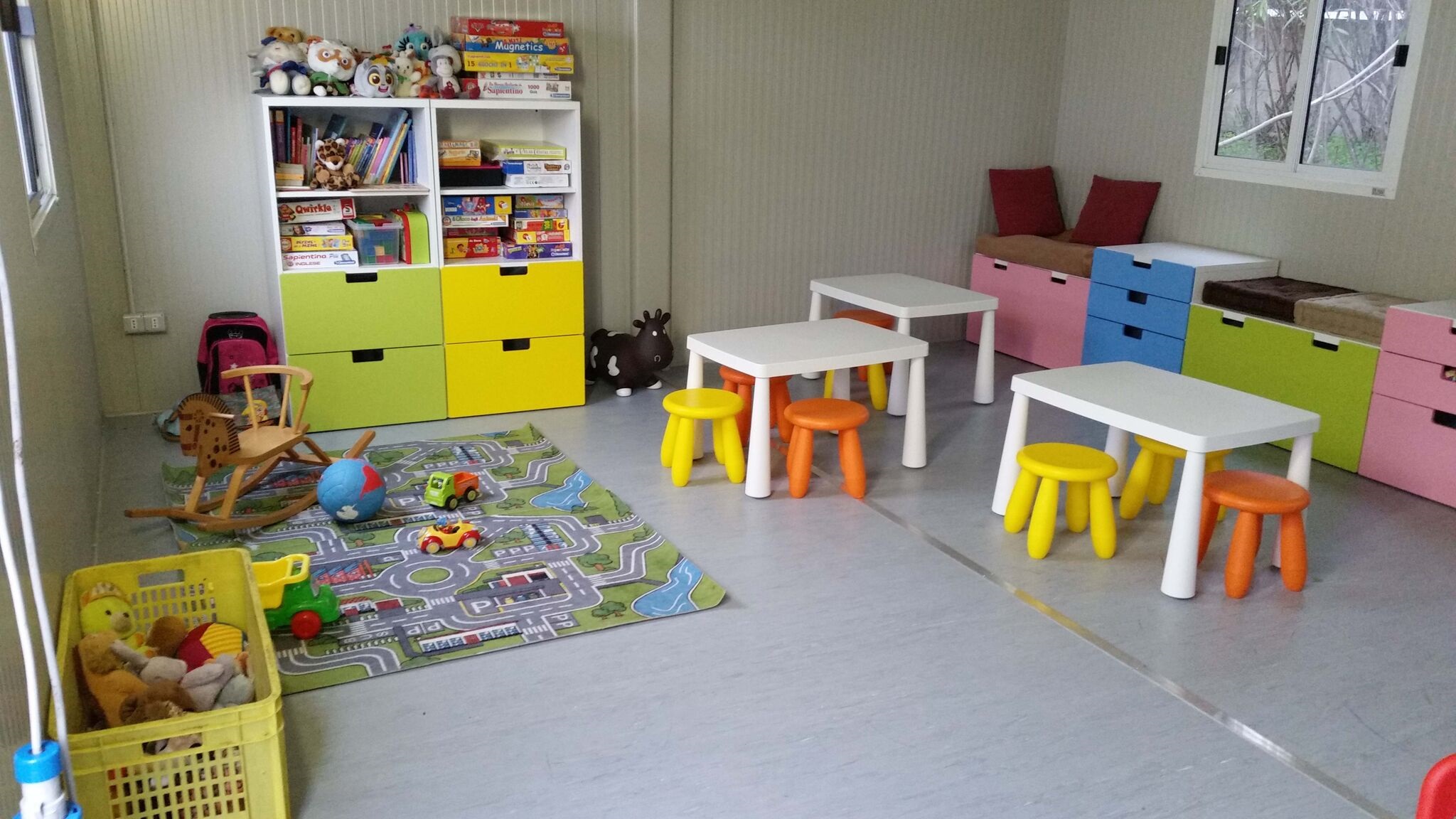 Since 2015, more than a million migrants or refugees have sought asylum in Europe, fleeing poverty, political unrest, or war. Italy – and more particularly the ports of Augusta, Pozzallo, Palermo, and Trapani – remains the port of entry by which the greatest number of migrants arrive; 177,533 in 2016.

With hopes of joining other European countries, nearly 600 migrants transit Ventimiglia daily.  The city is a strategic crossing point for those hoping to access French territory. Should they make it across the border, the French authorities often take them back to Ventimiglia, even if they are minors.

The municipality hasn’t established a specific facility dedicated to families with children and unaccompanied minors. A temporary camp runed by the Red Cross was opened near the highway on the city outskirts to accommodate all migrants without distinction, but conditions for the more than 350 people staying there are unsanitary and crowded.

In view of these conditions, there are many unaccompanied minors, women, and families who prefer to settle under the bridge at Via Tenda outside the camp, susceptible to smugglers and human traffickers.

To date, more than 200 people have been identified in this area.

In addition to the partnership established with Terre des Hommes Italy on the psychological, psychosocial and legal care of UMM, AMADE and the Monegasque Red Cross have joined forces to set up and equip a "children and mother space" module in which they have access to recreational and recreational activities.

- A total of 216 people among minors, families, and pregnant women were directly and individually assisted

Support of migrants children in Vintimiglia 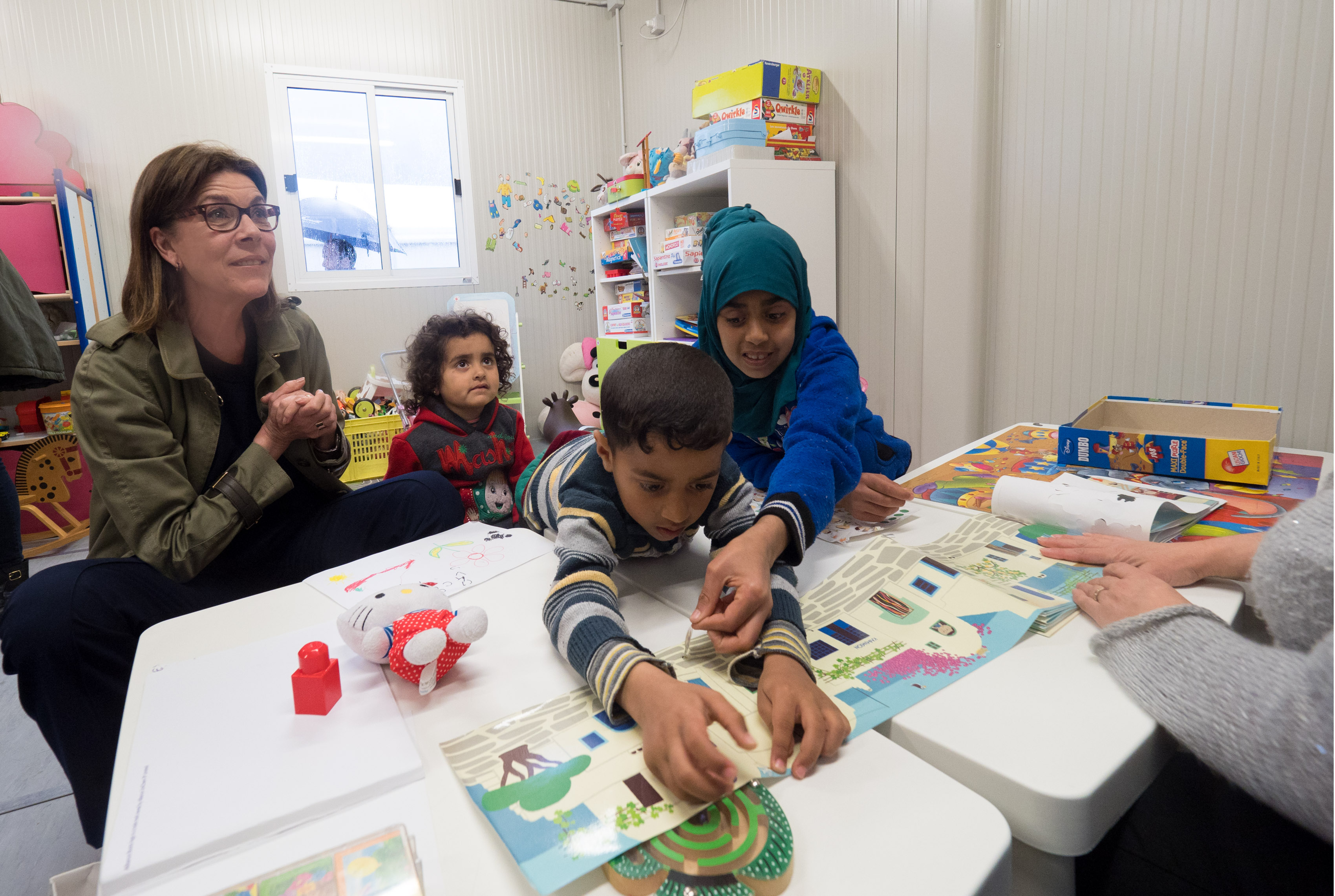 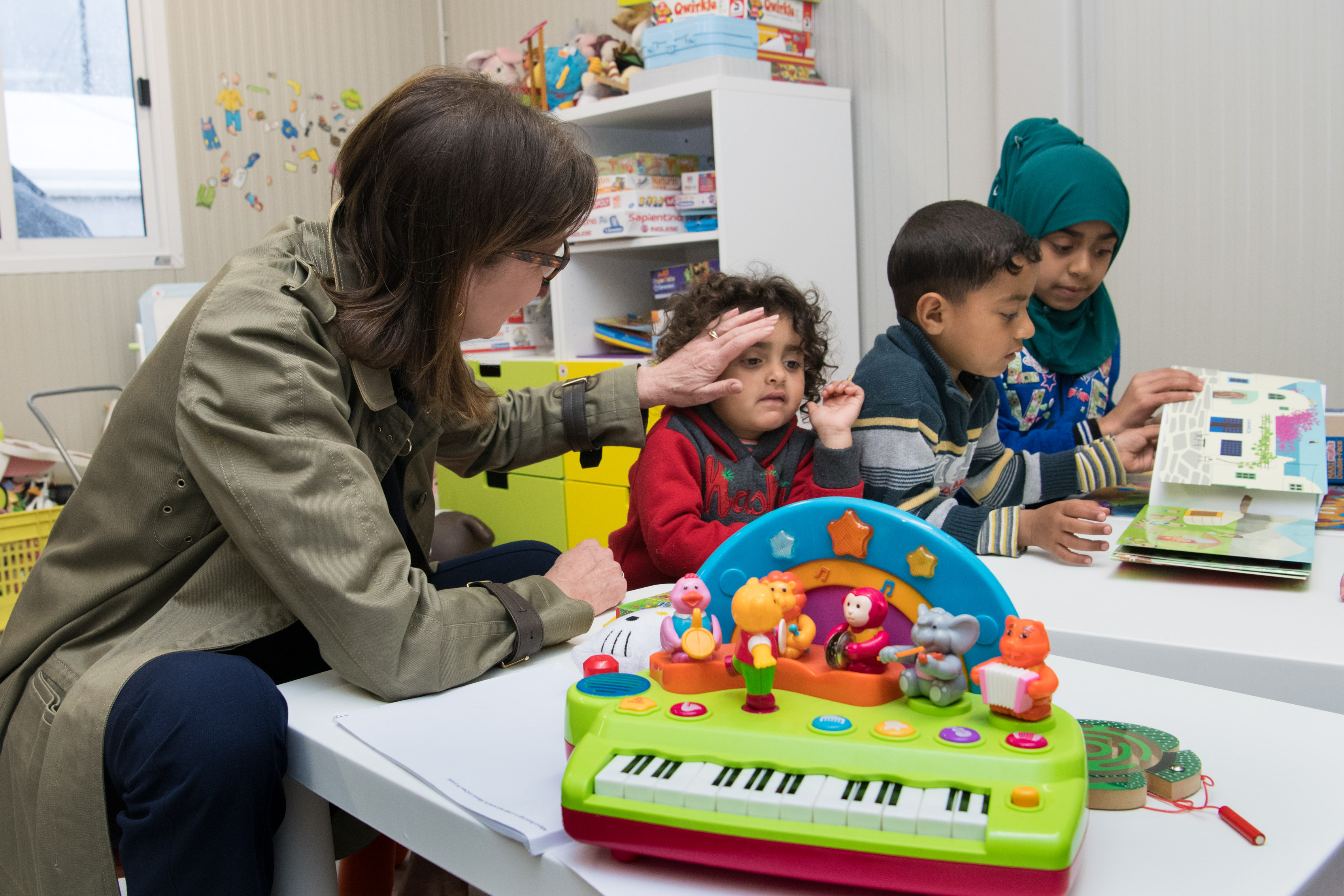 Despite the decrease of arrivals from Libya, the flow of refugees transiting through Ventimiglia never stopped: between January and May the general number of people in town remained constantly between 300 and 400, but it increased rapidly between May and June with peaks of 700. The most representative nationalities of refugees in transit remain Sudanese, mostly from Darfur region, and Eritreans. Among the other nationalities, our team registered an increase of people coming from Libya, Chad, Ethiopia, Mali and other Western Sub- Saharan countries. Most of them arrive in Ventimiglia with the intention to reach northern European countries where they hope to reunite with their family and friends or to have a better chance to integrate because of the language and jobs opportunities.

Is a 16 years old boy from Chad, extremely vulnerable due to the abuses and tortures he had to suffer during his stay in a reformatory before and a long detention in Libyan prison after.

Despite he reported to be underage to the Italian police at disembarkation in Sicily, he was registered as ‘adult’ (25 years old) and that’s why – after a short hospitalization in Sicily due to his healthy conditions he soon was transferred into a centre for adults without receiving any proper support, hearing, care or legal assistance. Unable to stand this situation the boy opted to escape from the centre and arrived in Ventimiglia were FARO team met him and promptly assessed his needs.

Thanks to the intervention of the lawyer the age registration was changed, and the boy received an appropriate orientation and assistance.

He was also supplied with the psychological assistance available at the Roja Camp thanks to the mediation service ensured by FARO to him.

K. 16-year-old from Afghanistan. The aspect reveals his age: a teen face and a thin body. He’s shy and avoids the eye contact always. K. had to grow up rapidly: he lost the family when he was 14 and moved to Iran in search of safety. The Iranian Government forced him to fight against Daesh in Syria, in return for obtaining a 2 months residence permit. At the age of 14 K. has become a child soldier enduring the extortion of a Country from where he hoped to find protection. After 3 months he escaped to Greece through Turkey and had lived in an island for one year in a detection center without the possibility to go to school. He was able to escape from that place to Patras and paid 400 Euros for a 38 hours journey to Venice, hidden under a truck. K. reports that Italian police hit and conducted him to the station and attested his majority. From Venice he went to Milan sleeping in park close to the central station for 15 days. Then he arrived in Ventimiglia, where he met Terre des Hommes team. We immediately offered a legal support, firstly in order to change the age reported on the document. Despite our commitment K. left the church of Gianchette after 2 days.

F. is from Cameron and met Terre des Hommes team for the first time in the last months of 2016 when he was 15 years old. Differently from other migrant minors, F. decided to stop in Ventimiglia and try to build his future in Italy. He received from our team a first orientation assistance related to reception services in the city. He stayed in the Church of Gianchette for a while, then he was transferred to “Villa Catina” center, where Terre des Hommes has a good relations with operators. F. integrated well in the center and he’s always respectful towards operators and other beneficiaries. He has shown soon a strong attitude to learn Italian as well as to study IT. He would like to become a computer programmer and in order to realize this dream, F. will participate to the third edition of the Terre des Hommes Scolarship Programme. His plan is to attend an IT course to learn the first basis of computer. F. has been assisted by Terre des Hommes since his arrival in Ventimiglia, letting an important continuity in his assistance which is not easy to ensure in that context.

M. (16) and A. (17) are two siblings from Eritrea. Together with another Eritrean minor, N. (17), they had been rejected by the French police although they were registered in France and legally hosted in a reception center in Nizza. Conducted close to the border with Italy, they were forced to take a train to Ventimiglia. Terre des Hommes team suddenly helped these minors in the defense of their rights. Our legal consultant contacted two French lawyers to build a synergy due to the seriousness of the case. Indeed according to the Convention on the Rights of the Child (1989): “States Parties shall take all appropriate measures to ensure that the child is protected against all forms of discrimination or punishment on the basis of the status, activities, expressed opinions, or beliefs of the child's parents, legal guardians, or family members”[art. 2]. Thanks to this collaboration, all the Eritrean children could return to France where social services took their custody.

G.is from Mali and he doesn’t speak any other language apart from Bambara. Thanks to the fundamental language mediation of Mrs. Froissart, we could get some information: G. said he has a brother in Spain foreseeing the possibility to ask for the family reunification. Obtained the phone number of this person, our field officer sadly discovered that he wasn’t G.’s real brother, so there was no chance for them to be reunified. Moreover this friend in Spain tried to convince G. to stay in Italy because he couldn’t help him. Given the loss of his expectations, the boy isolated more and more and his appearance was often depressed. In order to help the beneficiary, Terre des Hommes reported his case to MSF psychologist for an appropriate case management.

N. 12-year-old, from Afghanistan, on the move to reach his siblings in Germany. He arrived to Marseille, then, because of the lost of orientation, he took a train to Ventimiglia. He asked assistance to our staff in the Church of Gianchette since he had lost the phone in France, with all contacts. Terre des Hommes found his siblings on facebook letting N. to talk with them by phone. Our team also explained there were the conditions to ask for a family reunification, being both siblings regularly resident in Germany. Terre des Hommes field officer contacted a German association that offers free legal support to have a counterpart and a fellow association in Germany. Despite the willingness of N.’s siblings to follow the legal process of reunification, the boy didn’t want to wait in Italy and was eager to go to Germany. Given this strong motivation, he decided to leave anyway.