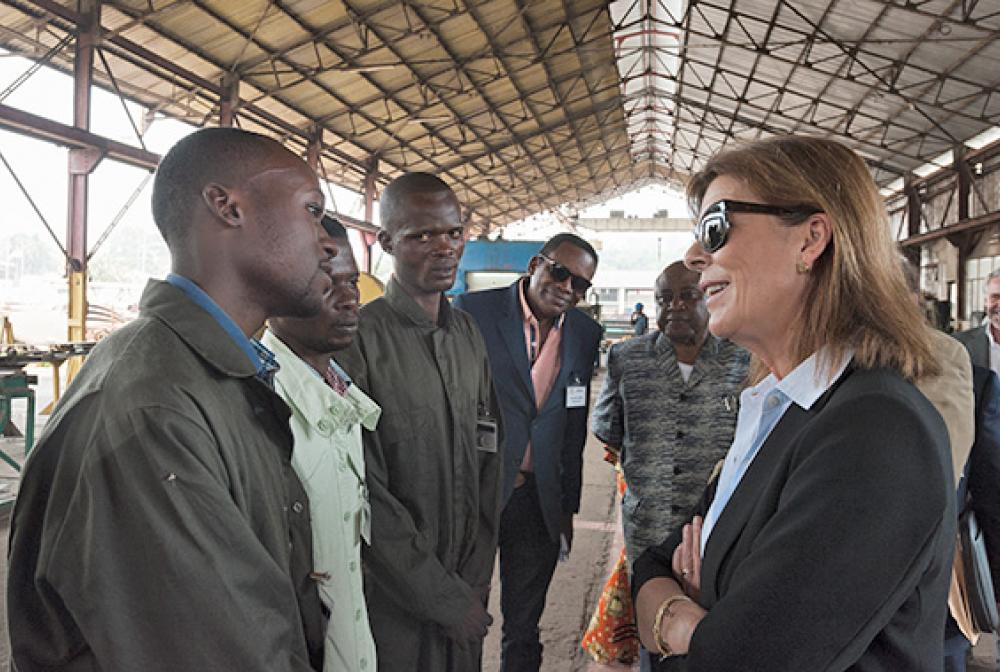 HRH The Princess of Hanover, President of AMADE, traveled to the Democratic Republic of the Congo to meet the partners and beneficiary children of the association.

From the 25th to 29th September 2016, the President of AMADE Mondiale was in the Democratic Republic of Congo to visit the projects supported by AMADE. During this trip, HRH The Princess of Hanover had the opportunity to visit the "witch" girls at the VTA Center in Kinshasa, to attend the first baptism of young Capoeirists benefiting from the "Capoeira for Peace" programme, to those in the vocational training projects at CHANIC shipyards, to visit the Heal Africa hospital dedicated to girls and women victims of sexual violence  in the east of Goma, to meet young children demobilized from armed forces, and to visit MONUSCO and UNHCR in the Masissi region of North Kivu to meet the internally displaced women and children.

During her last trip to Kinshasa in June 2013, as part of Printemps des Arts, HRH The Princess of Hanover, having been particularly affected by the situation of street children (more than 25,000 in the Congolese capital), wished to visit the Vivre et Travailler Autrement ("Living and Working Alternatively") Centre, an institution dedicated to the protection, care and reintegration of street girls accused of "sorcery". After this meeting with the sisters in charge of the establishment, and having been particularly affected by the testimonies of these unjustly stigmatized girls, the President of AMADE wished to come and support this centre. The partnership has since been used to renovate the centre's buildings and to ensure the care of the 30 girls in boarding (housing, food, education, access to health care). 17 girls have since been able to reintegrate into their families and two are now pursuing university studies. These reunions were full of emotion for these "witch" girls having regained dignity and hope for the irfuture thanks to "Mama Caroline". This visit was also the occasion for AMADE's General Secretary, Mr Jérôme FROISSART, and the director of the VTA Centre, Sister Gorette KUMASAMBA to renew the partnership between them for the third year in a row.

AMADE is also part the Embassy of Brazil in the DRC's initiative "Capoeira for Peace", which is a programme using capoeira as supporting tool to promote the social and psychosocial reintegration of child soldiers and other vulnerable children. Initiated in 2014, the programme now benefits from UNICEF's support regarding the reintegration of former child soldiers in North Kivu, UNFPA's (United Nations Population Fund) support regarding the reintegration of street children in Kinshasa and lastly UNHCR's (High Commissioner for Refugees) support regarding the reintegration of internally displaced children. A total of 2,600 children have benefited from this programme to date. With such strong results, other donors wish to associate themselves with this programme.
During this trip, the President of AMADE had the opportunity, in the presence of His Excellency Mr. Denis KAMBAYI, Minister of Youth, Sports and Leisure, His Excellency Mr. Paulo UCHOA, Ambassador of Brazil in the DRC, Alain REMY, Ambassador of France to the DRC, Mr. Mamadou DIALLO, Deputy Special Representative of the Secretary General of the United Nations, Ms. Diene KEITA, UNFPA Resident Representative, Mr. Pascal VILLENEUVE Resident Representative of UNICEF and Mr. Yannick N'SALAMBO de WOUTERS, President of the Abada Capoeira Congo association to visit the French Institute of Kinshasa and attend the first Batizado (baptisme) of capoeirists in the Democratic Republic of Congo.

In the field of education, AMADE wished, after consultation with one of the main private Congolese operators, the CHANIC shipyards, to initiate a vocational training project for young adolescents from the streets. Benefiting from the Auteuil International Foundation's technical expertise, this project aims to promote young people's professional integration within the Congolese private sector after they have received training in the 6 vocational training centers with the help of REEJER (REseau des Educateurs et JEunes de la Rue a.k.a "Network of Educators and Street Youth"), which is a platform of Congolese associations dedicated to the protection and care of children in street situations (www.reejer.org). The pilot phase of this program aims to support the reintegration of 120 young people.
This trip provided the opportunity to visit the CHANIC shipyards, whose enterprise wished to join this innovative project by opening its workshops and offer these young apprentices advanced training courses. The adolescents from the first stage of this project received a certificate attesting to their training from the President of AMADE, as well as the material needed to start their new life.

In Goma, in the east of the country, the delegation was accompanied by Mr. Thierry DENTICE, Head of UNICEF's Eastern Zone, at Heal Africa Hospital, a health facility supported by UNICEF DRC dedicated mainly to the medical and psychosocial care of girls and women who are victims of sexual violence, vulnerable children or HIV/Aids orphans. On this occasion, Dr. Jo LUSI, founder of Heal Africa, wished to draw the President of AMADE's attention to the dramatic situation of women and girls. Rape is used in this region full of natural resources as a weapon of psychological destruction by the various militias in search of new territory.
The delegation also wished to meet former demobilized children in the Orientation Transit Center (CTO) set up by CAJED, a local NGO supported by UNICEF and a partner of the programme " Capoeira for Peace ".

Finally, AMADE, which is particularly involved in the care of migrant children and refugees, visited the Massif area in North Kivu, at the invitation of UNHCR, in the vicinity of Virunga Park, an area affected by various rebel movements, to meet the camp's Mungote population of internally displaced people. This camp, under the protection of MONUSCO and the UNHCR, has been hosting more than 15,000 internally displaced people for more than 10 years, forced to flee their lands on the Rwandan border in the face of the threat of armed groups. This camp, like the other 50 camps in North Kivu, home to nearly 200,000 internally displaced people, is predominantly populated by children. The women of Mungote reserved a reception of great dignity for The Princess of Hanover. Deeply affected by this transitional situation that doesn't seem to be abating, and victims of the worst atrocities, these women wished to alert the Princess of Hanover of their wish to be able to return to their native villages. A quick visit to the only school in the camp's vicinity revealed that while access to primary education was compulsory in the DRC, this remained theoretical. This school, with a capacity of 600 pupils, is far from being able to educate all of the 8,000 children in the camp. How can we prevent these children who have no education or hope from joining armed groups in the future? Teachers in Kinshasa have not received pay since 2012, but have decided to contribute to the prevention of this phenomenon as much as they can by working free of charge.