HRH The Princess of Hanover in DRC to visit programs supported by AMADE Mondial in Kinshasa, Gbadolite and Goma and launch the program "Dignity for Women" 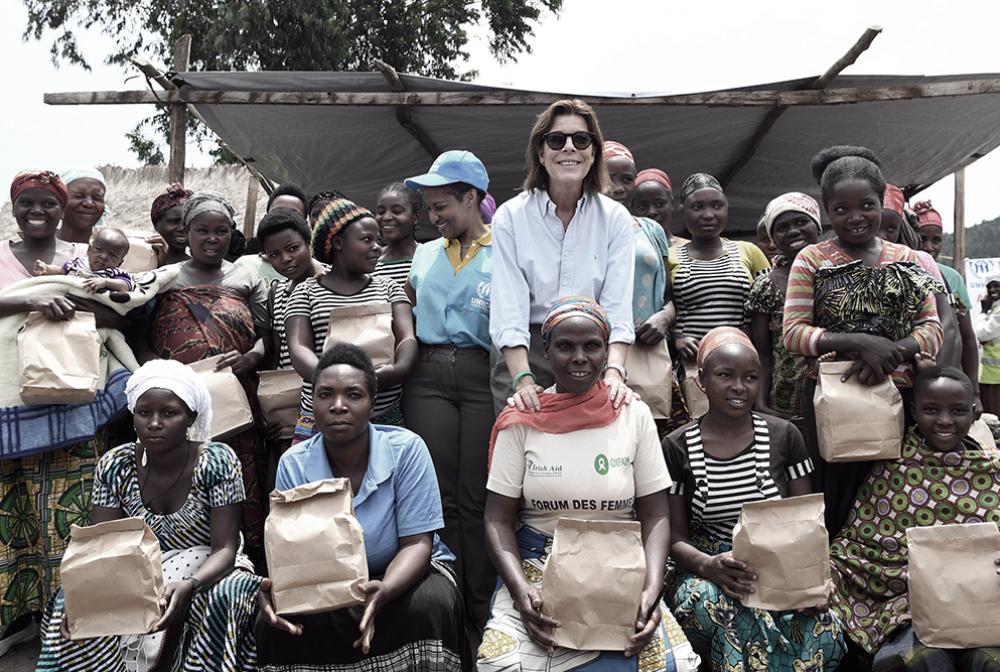 During her fourth visit to DRC, the Princess of Hanover has returned to the “Vivre et Travailler Autrement” Center (VTA), an institution dedicated to the protection and social reintegration of girls thrown to the streets by their families for being considered as "witch children". The partnership between AMADE and the VTA Center established in 2013 had permitted to ensure the renovation of the buildings, the complete care of the 30 girls housed in the center as well as the reinsertion of almost 20 girls in their families.

The Princess of Hanover also visited TEXAF Bilembo Cultural and Contemporary Art Center, where she met 50 pupils of the 6th grade classes of the Mushie and Lisanga schools. These 12-year-olds participated simultaneously in three educational workshops, focusing on games that raise awareness of biodiversity issues in the DRC (storytelling and role plays), cultural identity (knowledge of the ancients and values to build today and tomorrow) and the protection of the environment of the savannas and forests by the game Batela Mboka.

Together with the Princess of Hanover, these children discovered the short film "Debout Kinshasa!" and an episode of the series "Les Petits Métiers de Kinshasa" in the presence of the actress Yasmine and the director Sébastien Maitre. This 20-minute fiction tells the story of little Samuel, a young student from Kinshasa, who, forbidden to attend school due to lack of shoes, shows a lot of imagination to earn on the streets the few dollars necessary to be able to return to school. The film has been selected to more than 30 festivals around the world. The music of this film is a Kinoise work, the result of the collaboration with the musicians of the vocal group Kinphonik.

In the same space, the President of AMADE attended the opening of the "Génération Congo" exhibition by photographer William Dupuy, commissioned to register portraits of DR Congolese children who have benefited from the various projects supported by the Monegasque NGO.

On the same day, the President of AMADE visited the Regional Office of the United Nations High Commissioner for Refugees (UNHCR) where she was exposed to the problems of internally displaced persons and refugees in the DRC and more specifically to the situation of women and children in the country. Presentations were made by Ms. Ann Encontre, UNHCR Regional Representative, and Ms. Awa Ndiaye Seck, Resident Representative of the UN Women Agency.

On 26 September, the Princess of Hanover flew to Gbadolite where she presided over the inauguration of the first sanitary napkin manufacturing plant in the DRC. The project, entitled "Dignity for Women", is the result of a collaboration between AMADE, the two UN agencies and the Embassy of Brazil in the DRC, which have built a partnership with the Ugandan NGO T4TAfrica, led by Dr. Moses Kizza Musaazi. The production unit employs about 100 women who are participating in all stages of production, from the papyrus harvest, through the assembly, packaging and sterilization line of MakaPads, a sanitary napkin made up of local materials that are naturally absorbent and that do not use chemical elements and 95% biodegradable.

The creation of this production unit, in the form of income-generating activities within the camp, is a response to the request that had been made to Princess Caroline of Hanover during Her visit to the camp of internally displaced people in Mungote, in the province of North Kivu, in 2016. The next day she returned to this camp to distribute part of the production of the Gbadolite’s factory and thus respond to the appeal made by these internally displaced women, one year later, to guarantee their dignity.
On September 27 and 28, Princess Caroline visited Goma in order to take part to the first "Capoeira Baptism Ceremony" in the DRC Eastern region, in the context of the "Capoeira for Peace" program. The project aims at strengthening the process of social reintegration of demobilized children from armed groups through access to the practice of capoeira. This project has been initiated by AMADE and it is executed jointly by the Embassy of Brazil in the DRC and UNICEF, with the support of the Governments of Canada and Switzerland.

The Princess of Hanover has also visited the HEAL Africa Hospital, an institution founded by Dr. Jo Lucy, dedicated to the medical and psychological treatment of girls, adolescents and women victims of sexual violence. The President of AMADE attended the presentation of the project "Together for Women", which foresees the construction of a center dedicated exclusively to the treatment of girls, adolescents and women. At the occasion, a collaboration agreement has been signed between the hospital and the Monegasque NGO in order to raise funds to enable the initiative.