Innocent, 15 years old: The story of a former child soldier 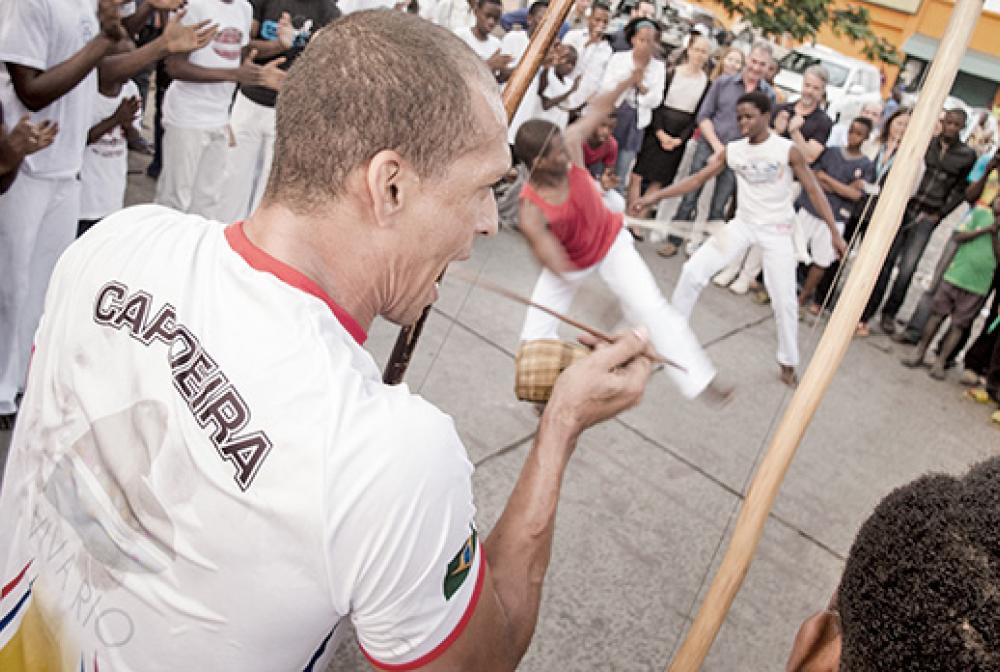 For boys aged 12 to 16 at the Transition and Orientation Centre (TOC) in Goma, which is managed by the CAYDC (Concert of Actions for Young and Disadvantaged Children) association with the support of UNICEF, the day starts with breakfast at 7am. The young people are then divided into different groups to follow courses (refresher courses or beginners classes) of their choosing in literacy, drawing, sewing, singing, music or dancing. In the afternoon, after the meal and accompanied city outing, they relax: today, Dieudonné has come to introduce them to capoeira!

The 37 young people who live here are all recently demobilised child soldiers. The transit and orientation centers have been set up to deal with the mass influx of children demobilised from armed groups: since 2004, there have been between 3000 and 4000 armed groups in the eastern Democratic Republic of the Congo. In 2013, at the peak of its activity, the centre welcomed 188 children during a wave of militia demobilisation following the departure of the M23. UNICEF places all demobilised child soldiers in foster families as soon as is possible, before reuniting them with their families. When the number of children exceeds the childcare capacity, priority is given to girls and boys go to a TOC, for a duration of less than 3 months usually.

Innocent arrived at the centre 18 days ago. At the age of 13 (he is now 15), he voluntarily joined the Mai-Mai Pareco, a self-defense militia in the Masisi in North Kivu because "all his friends in the neighborhood had already enlisted". Innocent was in 2nd grade, went to school every day and liked it. But he was influenced by his friends who told him that he would eat meat every day, and that he would be given clothes and boots. "At home, we could go more than 2 weeks without me eating a piece of meat. At PARECO, I was there to cook, so I was able to eat meat up to 3 times a week. I did not get any clothes or boots, but when we went to plunder villages we could have them then. On the other hand, the rest of life was bad. As soon as I made a mistake, I was beaten. I was beaten for nothing, for example if they found me at the well, they said I was taking too much time and they would whip me. There was not a week that went by where I was not beaten." After four months of this regime, and despite repeated threats that they would come and take him back from his home if he ran away, Innocent fled with two friends.

The respite was short-lived; enough time to learn that his father had died. Two days after returning home, another Mayi-Mayi militia came to plunder his village, and Innocent was captured with another child. The militiamen asked them to escort the goats they had plundered to their camp, and did not let them go. Innocent stayed with them for more than a year and a half. He was appointed "chief escort"; when the commander was on the move, he had to run ahead and clear the path for him. He received a gun and never left the commander's side - even going to sleep beside him. One year after he was captured, Innocent participated in his first fight, which was against a rival militia, the Nyatura. "I saw people die. I was afraid," recalls Innocent. "I had to shoot a fugitive because the commander ordered me to."
Six months later, the Nyatura, assisted by the Democratic Forces for the Liberation of Rwanda, responded. While everyone was running away, Innocent took the opportunity to escape, walking alone for two days to reach the MONUSCO camp in Kitchanga. Though he had left his rifle in his escape, he succeeded in proving that he was a child soldier by brandishing his military gourd.

Innocent has no news of his family; he just knows that they have moved to flee the fighting, and that one of his brothers has also joined an armed group. Returning to civilian life is often complicated for uprooted young people who have been accustomed to eating or obtaining anything with a rifle. In the villages where they come from - if they can return, they will face poverty and will have to work in the fields, which is a painful activity that pays little. A minority will return to the armed group, for convenience sake. But others will study and achieve their dreams.

Innocent dreams of becoming a doctor.