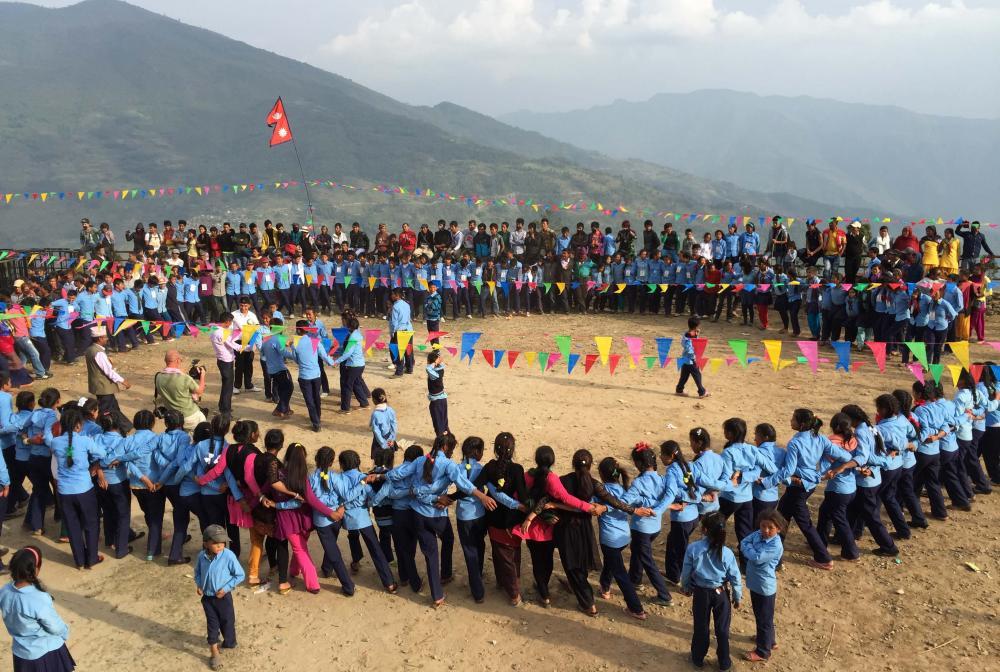 Galerie l'Entrepôt, AMADE and Namasté are united in rebuilding a college in Nepal that was damaged by the April 2015 earthquake.

On the 24th April 2015, a delegation from the Monegasque Namasté association visited the Rigaon canton, in Nepal, for the college's inauguration. The foundation stone was laid by HSH Prince Albert II in October 2011. After the construction of two primary schools, this college was the hope for a better future for the 300 students gathered at the inauguration ceremony.

The next day, an earthquake measuring 7.9 on the Richter scale devastated Rigaon, razing the majority of houses in the village to the ground, killing 70 people, injuring more than 200 people including many children and seriously damaging the college that had just opened the day before.

After mobilizing for the earthquake that ravaged Haiti in 2010 and the typhoon Hayan that swept the Philippines in 2013, Galerie l'Entrepôt wished to once again join forces with AMADE Mondiale in favour of the children affected by this natural disaster. AMADE and the Galerie l'Entrepôt naturally wished to help the Namasté associationin rebuilding the Rigaon college and thus restoring hope to those children that were so proud of their school.

An auction will be organized at 7:00pm on the 28th January 2016 at the Monaco Yacht Club. Thirty or so Monegasque and international artists, including Andy Warhol, nan Goldin and Christo, wished to respond to this initiative that was under the patronage of HSH Prince Albert II.

La Galerie Entrepôt, french for "the Workhouse Gallery", presents young talents from all walks of life.
In his very active gallery, Mr. Daniel BOERI defends emerging artists.
All forms of artistic expression are welcome; an approach to integrating the visual arts and other artistic expressions.
Since its creation, the gallery has had over fifty exhibitions and events - to its credit. Entrepôt organizes exhibitions for Monegasque artists. Simultaneously, with the artists of Monaco, Entrepôt holds various charitable events, notably following the earthquake that ravaged Haiti in 2010 and the typhoon Hayan that swept the Philippines in 2013.

The Namasté association was founded by Mrs. Nancy DOTTA in 2009. It follows in the footsteps of the remarkable woman, Collette GRÈVES, who was founder of the ACFN (Cultural Association Franco Népalaise) association after visiting the Rigaon region in Nepal, during a trek that same year.

NAMASTE's objective is to improve the living conditions of Nepalese people, especially in terms of education and health, to facilitate the economic development projects of the villagers whilst respecting their autonomy and the environment, and more generally, to promote, encourage and facilitate activities that will develop the links between Nepal and Monaco.

In the field of education, Namasté was at the heart of the project to construction the first primary school in the village of Salleri in 2009, to the benefit of 110 students.

Subsequently, NAMASTE financed several buildings, including a highschool (co-financed by the Department of International Cooperation and Monaco Aide et Présence), the extension of a nursing home situated near the dispensary, and a workshop for women's crafts.

Since its inception, NAMASTE has travelled for humanitarian aid work every year (with doctors and volunteers/donors) to better understand the needs of the villagers. This is how NAMASTE trained women to weave, embroider and sew, in addition to investing in the studies of the most deserving students.

Since the April 25th earthquake, NAMASTE has concentrated all its efforts on emergency needs by buying tarpaulins, tents and sheets for all the houses in Rigaon as well as blankets for each household.

NAMASTE is now aiming to undertake the reconstruction of the Rigaon highschool, which was severely damaged by the earthquake, according to the new anti-seismic standards that will soon be adopted by the Nepalese government.