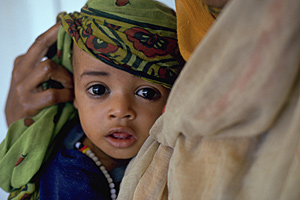 Women and children are still the most vulnerable populations in Eritrea, susceptible to poverty and food insecurity due to droughts and the persistening political impasse between the country and its neighbour, Ethiopia. Despite the progress between the United Nations and the Eritrean government et some local partner organisations, UNICEF remains a crucial intermediary between the government and bilateral donors in order to assure the well-being of vulnerable populations, especially women and children.

If the lack of current and accurate statistics regarding the current humanitarian situation in Eritrea continue to pose a problem, the field observations show that the level of malnutrition, the lack of sanitary materials and the physical risks of being exposed to landmines and unexploded ammunitions have fatal human consequences, especially for women and children.

Furthermore, although efforts are underway for the improvement of the health of the eritrean children, the infant mortality rate remains significant as it raises to 55%. The prevalence rate of HIV/Aids in Eritrea is very worrying and the care and support of affected people is insufficient, despite some recent progress. In addition to its effect on the physical health of children, HIV/Aids also has an impact on their life in general since many of them are orphans due to HIV/Aids and have been abandoned due to either fear of catching the disease or poverty.

It is with this context that Sister Pina Tulino set herself the mission of helping these impoverished populations by building homes for HIV-positive or abandoned children. The current project aims to support the care of 41 children welcomed across 3 homes, as well as a kindergarten, located in Himberty, welcoming 200 children.

As written in the aims of the project, 41 children were taken care of across the homes that were managed by the sisters of the Good Samaritan since late 2014:

- 10 children in the home in Ghezaberanu;

-16 children in the home in Matemenai;

-15 children in the home of Angels;

Of these 41 children, 20 are HIV-positive and 21 are from the streets. These children that were not able to be reintegrated into their failies are educated in the Italian school, Asmara, or other well-known educational establishements and they equally receive 4 meals a day. The HIV-positive children have access to care and adapted food.

AMADE also supports the functioning of the kindergarten in the village of Himberty, which is 30km from the capital of Asmara, where 210 children are receiving an education, by taking care of the Director's and five other teachers' salaries. The children also received a snack and educational material throughout the year.

Specific support was also provided for a 17-year-old HIV-positive girl, Sharon. Sharon was hospitalized in Naples for 4 months when a serious bacterial infection was diagnosed. Upon her return to Eritrea, her treatment was secured thanks to the funding allocated by AMADE.